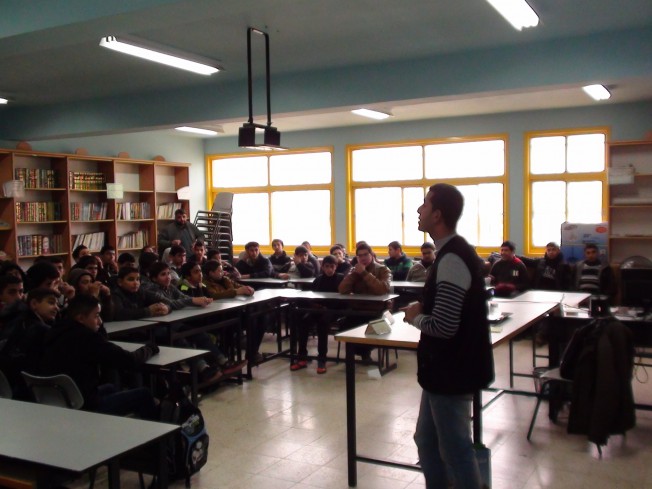 On 23 December 2013, LPHR launched a new project to mark the end of our first effective year as a charity. Our ‘Know Your Rights’ campaign with Defence for Children International Palestine (DCIP) had the key objective of empowering and educating Palestinian children to secure their basic rights while detained in the Israeli military detention system. Seven years on, our Know Your Rights campaign is ongoing, and remains critically important.

Similar figures for the previous five years mean that over 10,000 children have been informed of and empowered in relation to their basic rights through LPHR and DCIP’s Know Your Rights campaign. Training sessions have however been disrupted this year due to restrictions imposed in response to the Covid-19 global pandemic.

The Know Your Rights training sessions for Palestinian school children raise awareness of what children can expect during the arrest and detention process. They have focus on providing an understanding of relevant international human rights law concerning arrest, transfer and interrogation practices by Israeli military authorities. The training sessions also discuss rights found in Israeli military law and how these rights are systematically denied to Palestinian child detainees.

Israel continues to be the only nation to automatically and systematically prosecute children in military courts that lack basic and fundamental fair trial guarantees. According to DCIP, around 500-700 Palestinian children, some as young as 12 years old, are arrested, detained and prosecuted in the Israeli military detention system each year. The majority endure a traumatic or violent arrest, often during terrifying night-time raids on the family home; a coercive interrogation environment; physical and emotional abuse in detention; and a denial of essential services including an adequate education. These systemic violations of human rights adversely impacts every aspect of their young lives.

No Israeli children come into contact with the military court system. Palestinian children are not properly informed of their right to silence, are denied access to a lawyer before and during interrogations, and are not accompanied by a parent during questioning. A Know Your Rights information card prepared by LPHR and DCIP, which is distributed at training sessions, emphasises awareness of these fundamental rights, which if implemented could protect children from practices involving verbal abuse, threats and physical violence used to procure coerced and inherently unreliable confessions.

LPHR and DCIP will continue their dedicated work on children’s rights which disturbingly remains as urgent and critical as ever before. LPHR’s work on the Know Your Rights campaign forms part of our Children’s Rights project, which includes publication of bi-monthly Child Rights Bulletins highlighting a range of systemic human rights violations against children, and specialist engagement with the UK Government and parliamentarians. Details of our ongoing focused work on children’s rights can be found on our website here.

LPHR believes that no child should be prosecuted in a military court, or any court that lacks comprehensive fair trial rights and juvenile justice standards, and that any child held in custody should be provided with their full human rights as a basic and essential child protection, safeguarding and rule of law requirement.

RT @PalestineAPPG Co-Chair of Britain-Palestine APPG @JulieElliottMP urges UK to “support the independence” of the ICC in a letter to the PM about his comments on the investigation in occupied Palestinian Territory. Also highlights statement from UK human rights groups caabu.org/news/news/caab… pic.twitter.com/n7i3lqWBdT

The second asked the Secretary of State what representations he had made to his Israeli counterpart on the sexual violence reportedly committed against a Palestinian child in Israeli detention on 13 January 2021 questions-statements.parliame…